Habitat: Abruzzo chamois mainly dwell in high altitude areas (1,200-2,000 metres above sea level), characterized by grasslands and steep scarps. In the winter, when snow is abundant, they go down to the lower woods.

Diet: Abruzzo chamois are herbivores. The Festuco-Trifolietum thalii plant community is particularly important for their diet, because of its high protein content.

Reproduction: Mating season is in October-November. During this period, males engage in fierce battles to be able to mate with several females.

In May, females give birth to one kid.

Curiosities: A chamois in alarm emits a typical warning whistle.

Notes: Both males and females have very well-developed horns. Their summer fur has a fairly uniform light brown colour, whereas in the winter it takes a distinct and typical aspect with white, black and dark brown bands.

In the Park: The establishment of the Park and a careful protection have saved these rare ungulates from extinction. Their population has significantly increased in the last decades, to the point that specific research programmes have reintroduced the chamois to other Apennine protected areas where it had long disappeared. Within the Park, chamois are to be found on the Camosciara mountains, on Mount Meta, on Mainarde mountains, on Mount Amaro, Mount Marsicano and on the mountains around Val Canneto. 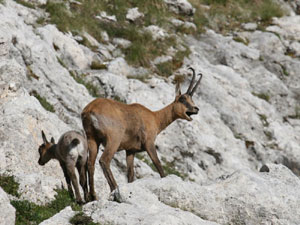 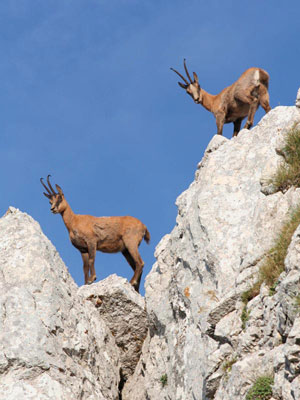